What is Jeju Olle trail?

Under the Korean tourism board’s initiative, well-paved, marked and designated walking trails have been set up all over Jeju Island. In the local Jeju dialect, “Olle” means the narrow path between the street and one’s doorstep. The trails offer a great opportunity for locals and travelers alike to traverse through various landscapes, ranging from hills, mountains, rock formation, villages, farms, countryside, forests as well as sandy beaches.

There are 26 trails in total, varying in distance and level of difficulty. As the trails are well-marked, you may choose to do the treks by yourself or follow guided walks on any of the Olle trails which are operated entirely by volunteers and thus free of charge!

How to sign up for an Olle guided walk?

I sent an email to jejuolletrailinformation@gmail.com with our names, date of availability, the trail that we wish to join and the number of participants joining the walk. However, since the route information was all in Korean, I told them that we were flexible about the destination and were willing to join whichever trail that is available on the given date as long as we get to hike/trek.

The Olle team was very responsive to all of my emails and even gave us information needed to get to the rendezvous point. They even followed up by asking for my feedback after the walk, considering that I didn’t have to pay a single cent for such an amazing experience, their thoughtful services propelled me to return to Jeju just to try out the other Olle trails and meet awesome people!

On the day of the guided walking tour, we made our way to the Seongsan Harbour Udo Ticket Office. However, we had no idea who and how our tour guide looks like, we wandered around the building to look for him. Fortunately, we came across a Singaporean guy who approached us when we were in the convenience store. Apparently, he’s also joining the Olle guided walk and he came to check whether we are part of the tour. How thoughtful of him :)

Anyway, if you have signed up for an Olle walking tour and have no idea who the tour leader is, always look out for someone who carries a flag with the Olle logo (pictured below).

The ferry to Udo Island

We got ourselves return tickets to and fro the Udo Island as it’s cheaper than getting one-way tickets.

The ferry ride from the Seongsan Harbour to Cheonjin port on Udo Island took approximately 30 minutes. It was still very chilly at the end of March with temperatures hovering between 6-12 degrees Celsius. Hence most of the passengers stayed inside the cabin where all of us sat on straw mats laid out on the floor. 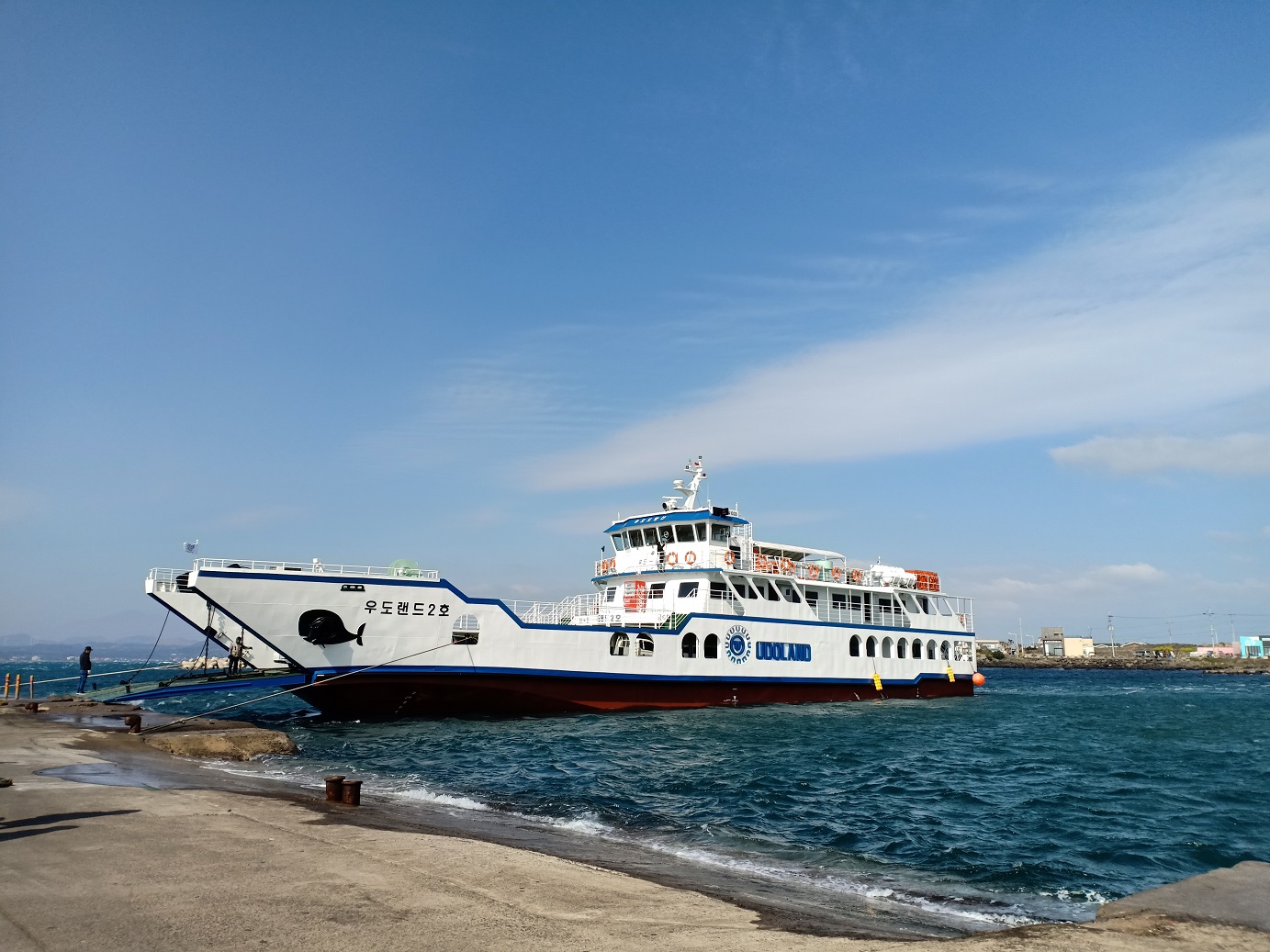 The guided walk at Udo

Literally means “cow” in Korean, Udo Island resembles the shape of a cow lying down. The entire trail is approximately 11.3 km and is considered easy with no significantly difficult inclines or sections throughout the course. It generally takes an average person 4-5 hours to complete.

The trail took us to some of the most beautiful landscapes Udo has to offer. From vast green fields filled with Canola, expansive fields covered with crimson clovers and red poppies, stonewalls dotting the island, striking lighthouses perched on the hill top to embankments of barley and rye fields.

Below is the summary of the Olle trail at Udo Island: 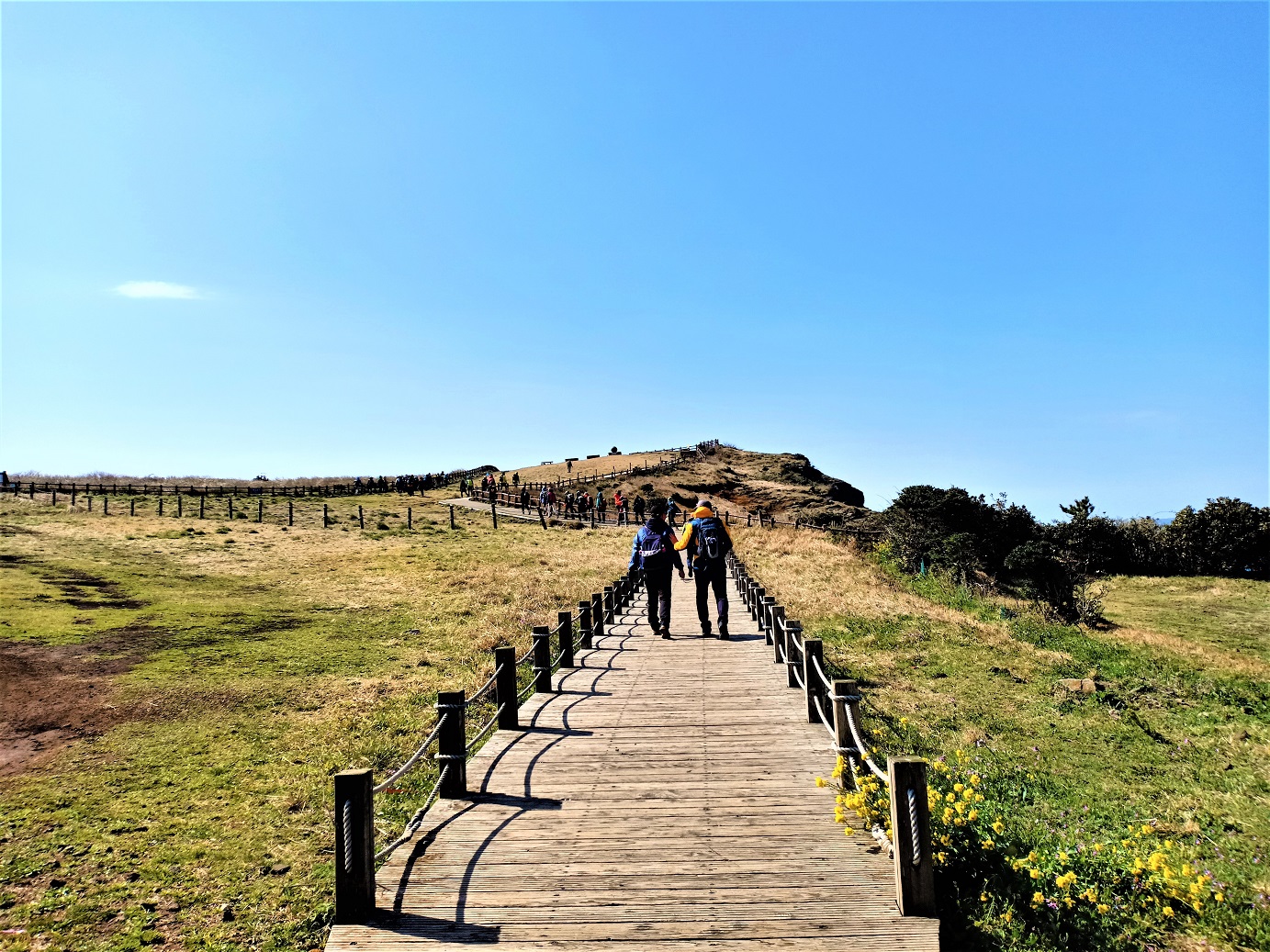 Some sections of the trail are made up of boardwalk.

Apart from my friend and I as well as the Singaporean guy, the rest of the group members are local Koreans. Some of them are regular walkers/trekkers of the Olle trails who actually dedicated one or two months staying on Jeju island just to complete all of the Olle trails!

Despite the language barrier, the group members tried their best to engage and interact with us. Thanks to some of the younger Korean members who can speak English, we were able to have a more in-depth conversation with each other and not just our body gestures XD

Owing to the lack of tall buildings and low vegetation which dotted throughout the island, winds can be pretty strong especially when you are out in the open space. It was a battle against gusts of strong breeze when we were trekking uphill towards the lighthouse on the hilltop. Fortunately, the slopes were relatively gentle and the paths well-paved.

After taking a short break at the lighthouse, it’s time to get going. We walked down a gentle slope which offers a sweeping vista of the sea and green fields afar. Along the way, we were greeted by seas of swaying plumes of pampas grass and canola flowers, which  reminded me of the song “Fields of Gold”.

We continued our journey, walking past the Canola farm and several cozy-looking cottage houses.

Our stomachs started to rumble, it’s time to eat! We stumbled upon a decent-looking family-run restaurant and a fluffy ginger cat right in front of the restaurant, we unanimously decided to have our lunch there, perhaps because we spent too much time playing with the cat XD

Again, since the menu was written entirely in Korean, we relied on our trusted Korean friends to do the ordering. And of course Koreans being Koreans, alcohol would be on the menu as well :)

Introducing Makgeoli, a specialty alcoholic drink in Jeju made from fermented millet rice. Makgeoli has a milky, off-white appearance with a slight viscosity and often comes with a layer of chalky sediments at the bottom of the bottle (make sure you give it a good shake before drinking). It tastes slightly sweet and tangy which can be quite addicting as you might be tricked into thinking it’s a non-alcoholic drink! Another interesting observation I noted is that the locals love to drink Makgeoli from a stainless steel bowl. I guess you can get a bigger gulp of alcohol with each mouthful XD

When lunch was served, there were so many side dishes on the table that I didn’t know where to begin! Pickled radish, seasoned red seaweed (something I never tried before!), seasoned sweetened anchovies, bean curd, steamed silky smooth egg custard with minced pork and vegetables (something like Chawanmushi), sauteed fish fillets garnished with sesame and more seasoned or pickled seaweed or kombu (kelp). I couldn’t decide which tasted the best as they were all equally delicious, but if I really had to choose, the fish stood out among the other dishes. Soft, succulent and tender, the roasted sesame seeds gave the dish an additional aromatic, nutty fragrance.

All of the dishes went really well with Korean rice which is soft and moist (similar to Japanese rice). Last but not least, wash it all down with some makgeoli and some Korean sesame oil-infused seaweed soup. It was one heck of a satisfying meal!

After lunch, we resumed our walking tour and we headed to the beach. White, sandy beaches, transition of the light blue, turquoise, azure to the dark blue of the sea water may appear to be very inviting for a swim. But don’t be fooled by the colours, the sea water was actually freezing cold even in mid-March!

After several photograph-taking sessions along the beach, we slowly made our way back to the Cheonjin port which is where we started our walk. That concluded our 11.3 km guided walk.

I highly recommend anyone who plans to travel to Jeju to try out the Olle guided walks. By walking around the entire Udo Island, the guided walk offers a wonderful sensory experience to slowly enjoy the scenic views and also the opportunity to interact with the locals.

We were fortunate to have met some really kind people during the guided walk, one of the women actually offered to drive us back to our hotel which was a 30-minute drive away. It is moments like these that inspired me to have compassion and to pass on the kindness I have received to the needy :)

Living the high life in London..