The Aurora Borealis aka the Northern Lights has been long sought after by many as a phenomenal wonder, and some people (especially the Japanese) regard it as a source of magical powers. My effort in seeking the aurora proved to be harder than I thought. 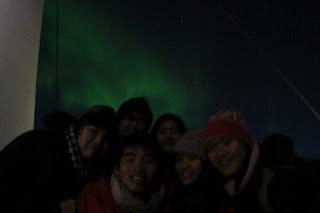 On the 2nd January (my second night in Tromso), my friends and I walked to a nearby beach just 30-minute walk outside of the city. We head stories from other travellers that spotting of the aurora was possible there. The weather that night was unstable and was quite volatile in a sense that there were strong winds and huge, dense clouds were shifting constantly in the dark sky. One of the requirements of being able to see the aurora is good weather, i.e. clear, dark skies. I had a bad feeling that viewing of the elusive aurora was not possible. We braced the blistering cold and ferocious arctic winds and also the unbelievably icy road conditions, headed to the said beach in hope of catching a glimpse of the aurora.
Somehow we got lost, ended up at a residential area near the beach. Luck was not on our side, we could not see anything besides clouds and the brightly lit moon. In the end, we decided to head home with disappointment as we could not stand the cold and the winds any longer.
The next day, we headed for a dog sledding tour operated by Lyngsfjord Adventures. We were transported to their camp about 75 minutes away from Tromso. We chose the evening trip as we believe we will have a much higher chance of seeing the aurora. However, the weather gods decided to disappoint us again. It started to snow when we arrived and the winds began to pick up. We changed into the provided astronaut suit-like windproof gear, and then off we went to another site where the husky dogs are. The dogs were surprisingly smaller and thinner than I had anticipated. We were first briefed by the guide there, on how to operate the sleds etc. I chose to be the passenger first and my friend drove the sled. The snowy weather somewhat turned into a blizzard-like condition, with strong winds blowing upon our numb faces and low visibility of the surrounding terrain. The first part of the sled proved to be challenging with hilly and slippery routes looming ahead of us. The dogs were hard to control and strong too; even with full brakes on, the dogs were able to pull the sleds with relative difficulty.
The most horrifying part of the path was an apparent downhill turn; one slight mistake would be deadly. Two of my friends who were behind us were flung out of their sleds as their dogs were speeding at the turn, and they could not slow down their sled. I was horrified when I heard my friend groaning in pain somewhere in the distance. I looked back to find both of them in the trees and undergrowth. Apparently, one of them hit hard on the ground and landed against the tree trunks. He lost sensation at one of his legs and he had a bruised eye and part of his jaw was injured. The other friend hit against a tree trunk on his abdomen, he did not suffer any serious injury fortunately. They were then sent back to the camp via snowmobiles.
We then continued with our journey in the blizzard. There were times where our sleds nearly hit the trees as the dogs drove dangerously close to the twigs and tree trunks. Many a time, the dogs fought with each other, causing the rope to entangle; the guide would then have to disentangle them one by one. The rest of the journey went relatively smooth, with our sleds passing through some of the remote yet beautiful wintery landscapes. Though I did not manage to take any pictures of the sledding adventure, the memory would remain in my heart for the rest of my life.
Eventually we returned to the camp and we were treated to a hot “meal” i.e. reindeer meat stew. My friend made a grand exit out of the camp on a stretcher and was hospitalised. We had our dinner and tried on the Norwegian sweet cinnamon bread for dessert. We then headed back to Tromso. 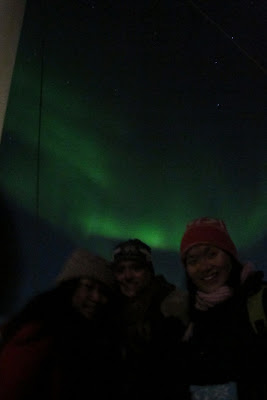 On our final attempt to seek the aurora, we decided to go on a cruise. The whole trip cost us 370 NOK  (student price, approx. 40£). We first took a coach trip which brings us through the arctic mountain range, the Lyngen Alps, and the Norwegian’s otherworldly terrains. The bus trip lasted for about 4 hours before we boarded onto a cruise ship at Skjervoy, which then transports us back to Tromso. We looked up into the dark skies in search of the aurora. There were few professional and experienced photographers and aurora seekers; and according to them, there is a faint streak of the northern lights, it was very faint to be visible to the naked eye. At around 10.30pm onwards, our wait was finally rewarded with displays the aurora, appearing and disappearing constantly against the moonlit dark skies. We were jumping in excitement and awed by the dancing northern lights that snake across the clear dark skies, which were constantly moving and appearing from different directions. At one point, the solar activity was at its maximal level, multiple curtains of lights merged and formed an arch across the sky. It was truly magnificent and lasted for about an hour or so. The lights then slowly faded away as we approached Tromso, where the city lights mask the visibility of the auroras.
We could finally return home with joy and satisfaction. Again, a tick off my to-do list :)
(Picture courtesy of Jason)