Have you ever wondered what you could create with light and music when combined together.

This is what TeamLab has achieved over the years with their amazing creativity using space, light, music and technology which resulted in an entirely novel niche of art.

Recently, I went to one of their latest events: Teamlab Jungle at Dojima River Forum, Osaka.

When we first entered the room, we were pleasantly surprised to see hundreds of rotating spotlights on every corner of the walls. It may  seem like a disco clubbing event initially, but surprisingly many young families brought their children and even parents along, making it a joyous family affair.

At 4pm sharp, the event started with parallel beams of light shot across the dark room and the patterns were constantly changing depending on the angle of the spotlight, creating a wonderful array of shapes and symmetries.

Just as I thought the remaining half an hour is going to be the same thing, huge helium-filled colourful balloons fell from the ceiling and were afloat across the room, it’s not just a feast for the eyes, it’s also a fun interactive event where people get to play with the art.

What came next was us being covered with a huge piece of translucent black cloth which covered the entire room. At first we didn’t understand the meaning behind the black cloth, but as I glanced at the spotlights through the cloth, it seemed like I was looking at the lights as if we were in the water. It created a surreal and ethereal experience one would never experience elsewhere.

The show ended with hundreds if not thousands of colourful light beams shooting from all directions and confetti started to fall all over the room, it really brought the inner child out of us where we could enjoy ourselves and have so much fun with something so simple. 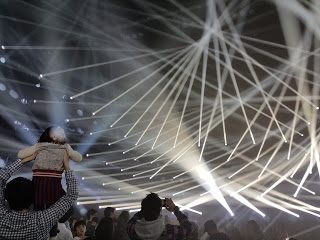 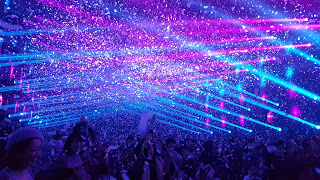 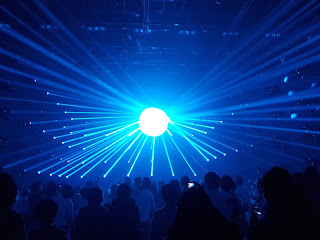 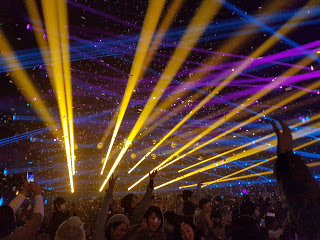