It’s been awhile since I last blogged about my life, I’ve been kinda lazy to update my blog honestly. Oh well, it’s been so long I last write a single word here that I’ve got an epiphany all our of a sudden that I wanted to write something and I wanted to revamp my blog. So voila! This is my newly designed blog, with new colours and pictures and of course new post! *winks* Since been 7 months since I first arrived in the UK, and gosh time really flies..gutted! Well since I’ve missed out blogging about so many stuff that had happened for the past few months, I shall just blog about some of the recent happenings!!!

Since my friends were paying a visit from Sheffield so I took this opportunity to book ourselves a trip to the legendary Loch Ness! The whole trip cost only 27pounds (got 10% off the normal price as we are students..ahhh the privilege of being a student is indeed blissful!

On the day of the trip, we woke up early in the morning and rushed to the assembly point as we were instructed to be there by 7.45am. The four of us dragged our tired bodies across the streets to beat the time and arrive on time…So at about 8-ish off we go to Loch Ness. Throughout the journey, the driver cum tour guide gave us some detailed briefing on the history of Scotland and the ancient battles that took place in the highlands. I wasn’t feeling quite well as we were sitting at the back of the bus and I felt queasy for not eat enough food for breakfast and we haven’t had enough sleep as we were watching movies for the whole night and barely had any sleep@@ (how to sleep if u have 2 snoring pigs in the room?!)

Anyways, the amazingly breathtaking views gave some consolations to my discomfort. 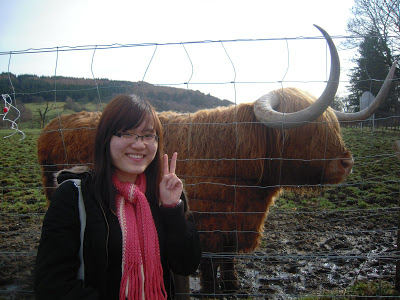 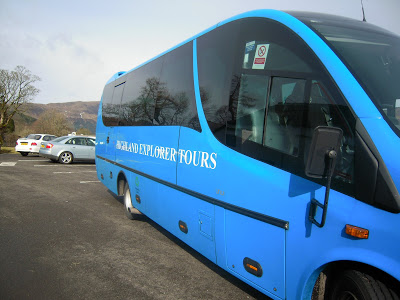 Eye-catching blue buses that we travelled in

Oh yeah, we travelled in those eye-catching blue buses and the windows were huge so that we could take in as many scenic views as we could! First stop is at Glencoe (Glen is the Gaelic(ancient Scottish diaclect) word for valley and loch for lake) and the sceneries there were utterly, indescribable breathtaking and panoramic! I was awe-struck, transfixed for one second before realising that we only had 10 minutes to take some shots. I was actually living my dream! I’ve always wanted to come to this heavenly beautiful place!!! I was relishing every moment there, taking shots of every angle possible… The coolest thing was…we actually saw a uber-fast ultrasonic jet fighter flew past us….We were stupefied and didn’t know how to respond when we saw this “huge” thing flew by, as we could only hear its sound few minutes later (talk about uber-cool stuff in my life!) It was definitely unforgettable! How many people could witness a real jet fighter in real life (Not in movies!) 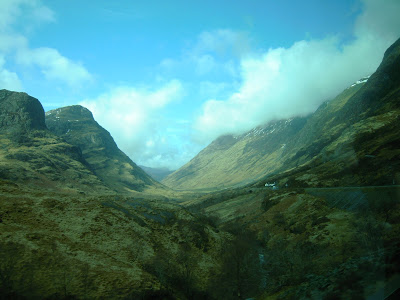 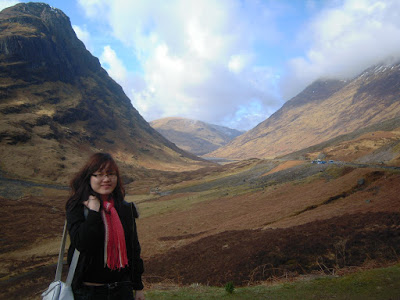 After a short stop-over at Glencoe we proceeded on our journey up north to Loch Ness!! As we were approaching the heart of the highlands, the mountainous views become more dramatic and roads become more winding. At about 1-ish, we finally arrived at our destination–Loch Ness! It is located at a small, quaint town, and literally all the locals survive on the tourism industry (i.e. no Loch Ness, no income..) We were each given a lunch pack, consist of a sandwich, an apple, a bottle of mineral water and shortcakes. Well worth the money that we’ve paid :) 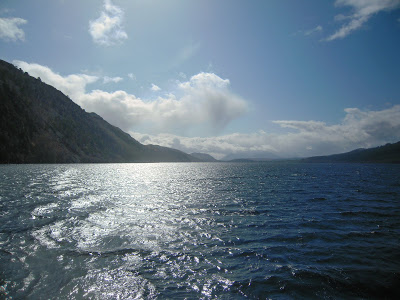 We went on the world famous Loch Ness cruise and it cost 10 pounds (paid to the tour guide, would cost 50pence more if tickets are bought on the spot) and the
cruise is estimated to take around one hour or so. Well, honestly the cruise wasn’t worth a ride at all, there is basically nothing to see unless you haven’t been on a cruise before, or else you would find it rather boring. 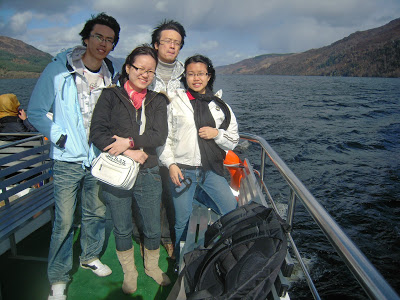 More disappointingly, the cruise only took us halfway to the open sea and so the remaining half an hour was spent on the return trip back to the dock (Great! duh…) Well, at least I can now proudly say that I’ve taken a cruise around Loch Ness…LOL Too bad we didn’t get to catch a glimpse of Nessie (the legendary monster that is believed to reside deep down under the dark waters).

After the cruise, we were once again on our way back to Edinburgh (it is a day trip afterall). On our way back, the kind tour guide stopped over at this monument, which is surrounded by the picturesque snow-capped mountains. Again, the sceneries is so goddamn beautiful!!! 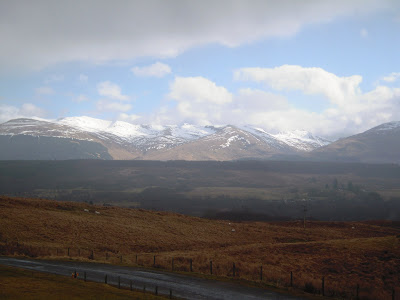 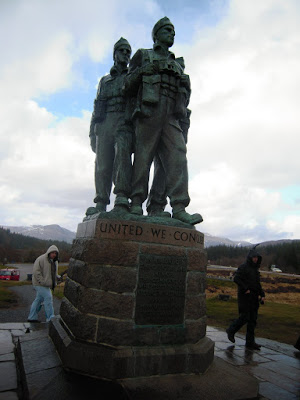 After a brief stop at this monument which gives a wonderful opportunity to enjoy the scenery of the surrounding mountains, we were once again on our way back to The Burgh…That’s it for a day’s trip, though the schedule is packed and we have barely had enough time to tour around the town at Loch Ness, it was certainly an experience of a lifetime that is filled with sweet memories and lotsa snapshots to be uploaded on Facebook (HAHA)…