Apart from being famous for its Ramen, I honestly didn’t know much about Kyushu before setting out on this trip. Who would have thought its volcanic landscape, lush greenery which really reminded me of the Swiss countryside and its breathtaking ravines make a lasting impression on me in which I had a renewed appreciation for Nature’s beauty. Below are some of the highlights of my Kyushu trip (non exhaustive by all means).

So, when I arrived in Fukuoka I couldn’t wait to try out Hakata Ramen, one of the most well-known versions of Japanese Ramen, known for its thick, creamy and greasy tonkotsu soup base, a result of hours and hours of slow cooking of the pork ribs.

Right after I checked into my hostel, I headed straight for the Canal City shopping mall for a breather after a long and hectic trip on the shinkansen. On the top floor of Canal City, lies the ultimate food heaven + paradise for all Ramen lovers out there – an entire floor filled with restaurants selling all kinds of regional Japanese/Chinese Ramens from Hokkaido Ramen to Nagasaki to Hakata Ramen. Since I was in Fukuoka, it was a no-brainer for me to go with the Hakata Tonkotsu Ramen.

I was simply spoilt by the numerous varieties of Ramen they had on offer on the menu, but I finally settled with the Tonkotsu Ramen with a huge slab of pork cheek (See picture below). And oh boy, the queue going into the restaurant was so long that it took me nearly half an hour to be seated and served. Being hungry, tired and grumpy (because of hunger), my mood immediately brightened up when my huge bowl of Ramen arrived. The huge slab of pork cheek was glistening gloriously with its fatty edges and perfect char-grilled meat. The pork cheek was one of the most tender pieces of meat I’ve ever had other than slow-braised pork belly. It literally just melted in my mouth, the fat to lean meat ratio was just right, it’s not as fatty as pork belly, so it’s not as cloyingly greasy as the pork belly. The broth was slightly too greasy and fatty to me, I know Tonkotsu is supposed to be greasy but it was too overbearing to the point that I could see pork fats solidifying in my broth most probably due to the lukewarm temperature of the broth. Yes, the broth did not come to me piping hot! So yeah that was a huge minus point for me.

In short, if you are interested to try a myriad of ramen from various regions of Japan under one roof and in the comforts of air-conditioning, I totally recommend going to the Ramen stadium in Canal City for its one-of-a-kind Ramen experience! 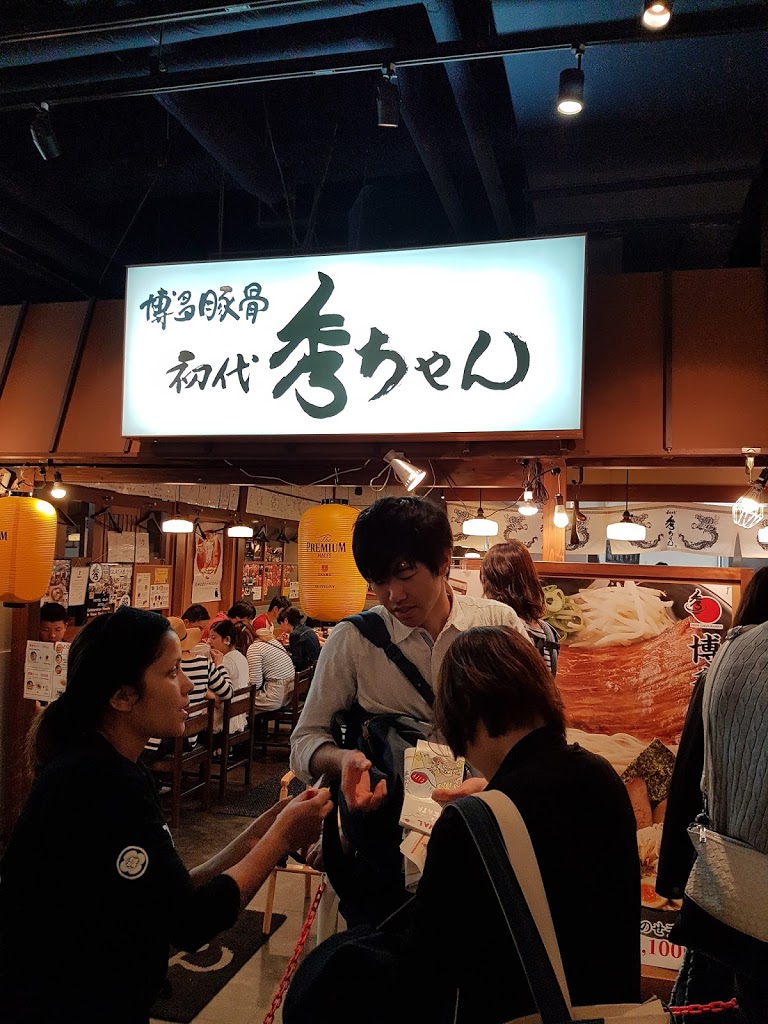 You must be wondering what “hells” I am referring to.

I’m talking about the “Hells” in Beppu, Oita, Japan, home to one of the most famous hot springs in Japan. One couldn’t help but to admire the thick, white steam that is constantly emitting from the ground blanketing the town in mystique. And if you like the smell of sulphur this place is probably your paradise.

I took the earliest bus departing from Fukuoka to Beppu (~3,100yen, ~4 hours) as I only had one day to spend in Beppu. Upon arriving in Beppu, the bus dropped me off at a tourist information centre in Kitahama area where I instantly signed up for a bus tour to see all 7 or 8 hot springs, aka Beppu Jigoku Meguri. The bus tour departs from the Kitahama tourist information 3 times a day (8.40am, 11.45am and 2.45pm). Click on the link below for more information about the “Hell Tour”.http://en.visit-oita.jp/access/beppu.html

Why did I sign up for the bus tour when one could access the hot springs via public transportation? Well, it was rainy that day, and as I arrived in Beppu close to noon, I knew I would be short on time to visit all 8 hot springs, so I chose to go with the tour out of comfort and convenience (take it easy XD).

To be honest, this hot spring tour wasn’t really my thing because it was too touristy. Each hot spring is set in a tiny, miniature garden and the hot springs were fenced up nicely with man-made structure or neatly placed rocks. Heck, they even piled up rocks and built an artificial beam/cover around and over the geyser and built an amphitheatre around the geyser so that audience could sit around while waiting for the geyser to erupt!

Nonetheless, it was still an eye-opening experience to see hot thermal springs exist in many different hues and colours. Even the hot spring water is drinkable and is touted to be healthy to the human body. I tried having a sip and it tasted sulphurous, no surprise there.

If you are expecting to see these interesting and bizarre-looking hot springs in their natural setting, you will be disappointed. Expect crowds, souvenir stores and eateries selling gimmicky snacks like hot spring boiled eggs, buns and vegetables steamed with hot spring steam, to creamy pudding made with hot spring eggs. 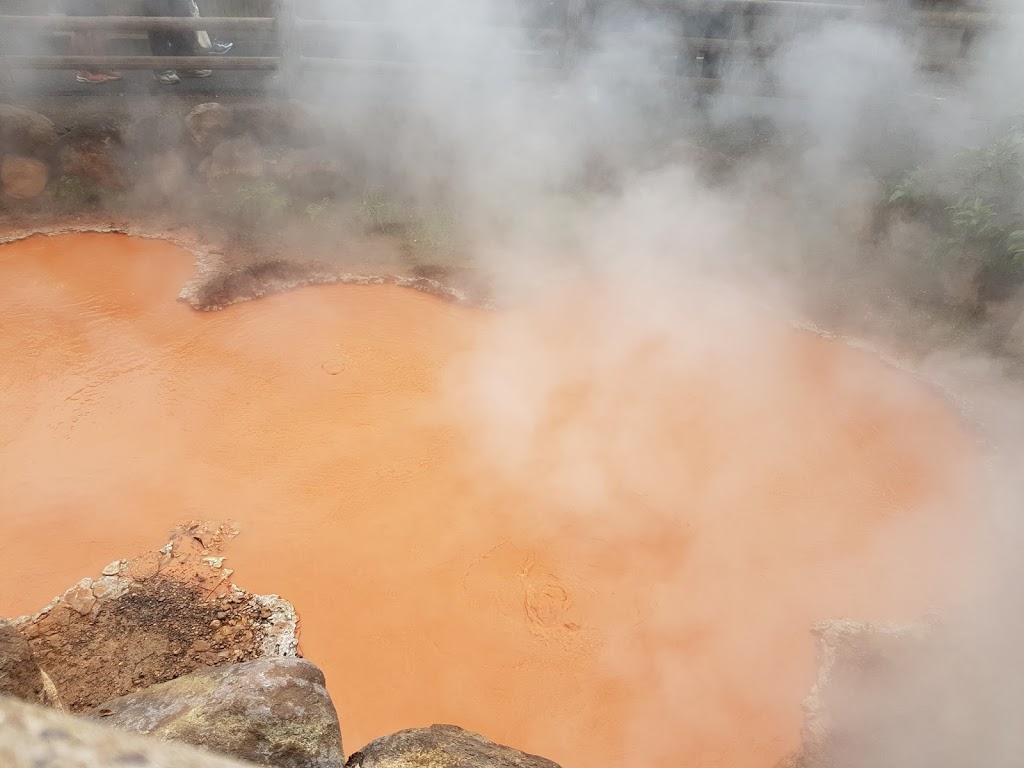 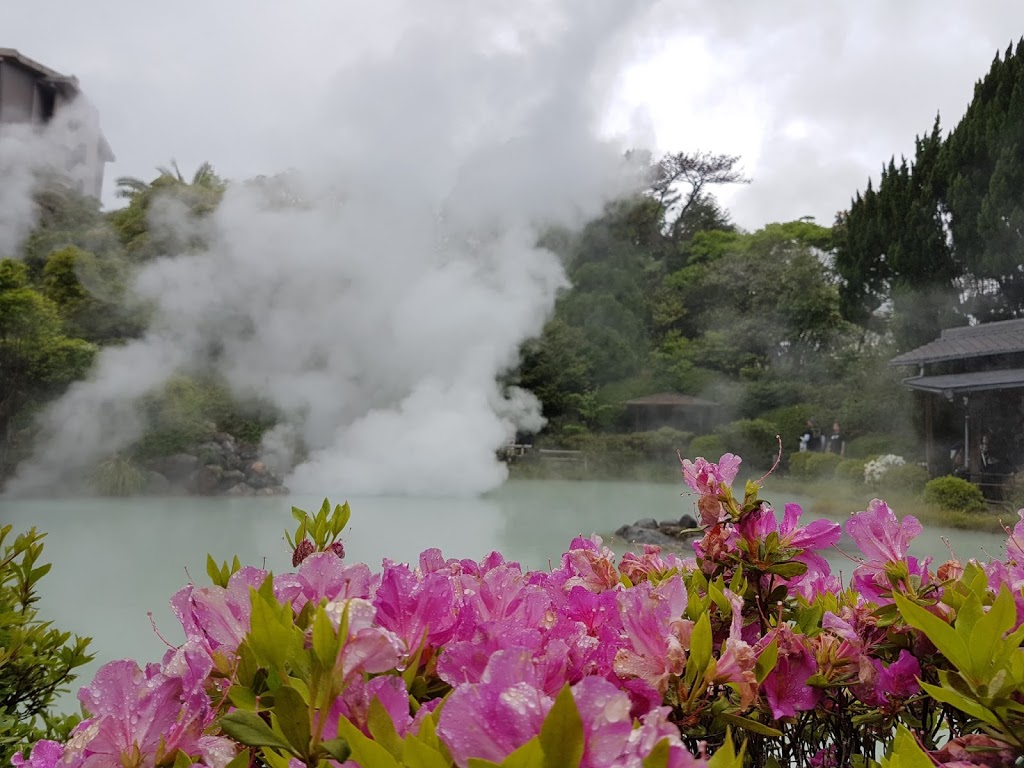 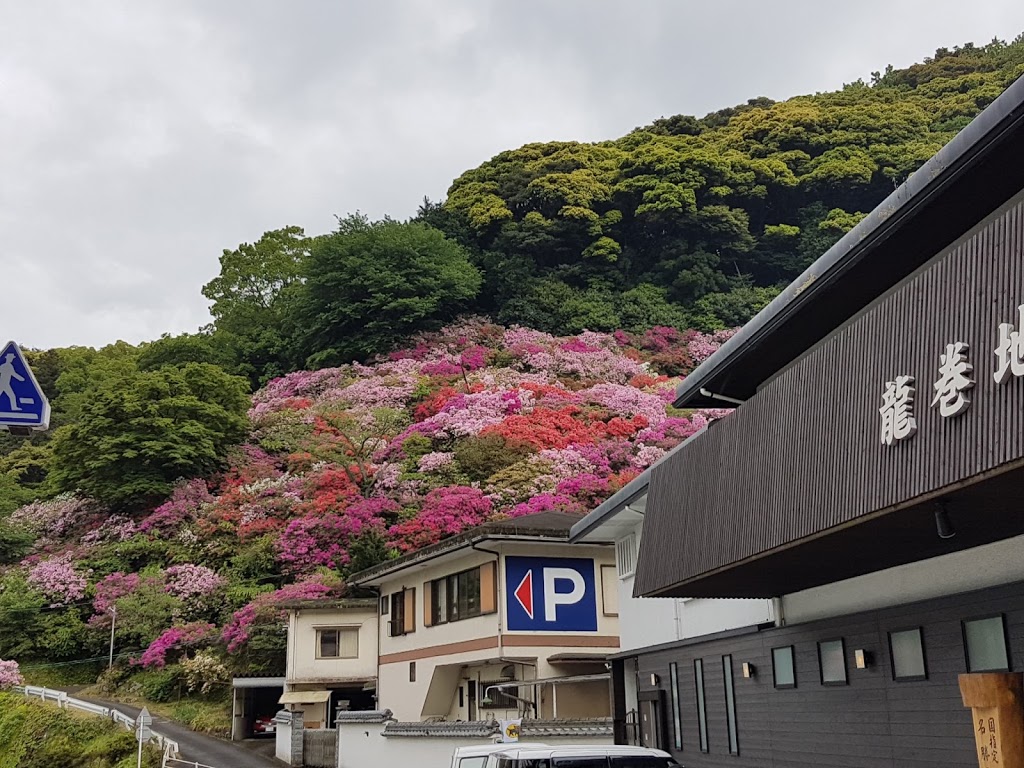 Contrary to common perception, Mt. Aso is not just one mountain, it consists of five peaks: Mt. Neko, Mt. Taka, Mt. Naka (Nakadake), Mt. Eboshi and Mt. Kishima. It is the crater of Mt. Naka that embodies the countless pictures of the caldera that is symbolic of Mt. Aso. The present caldera of Aso was a result of eruptions of four different calderas over the course of thousands of years, the lava and pyroclastic flow covered almost half of Kyushu, which contributed to the immense fertility of the soil and subsequently lush greenery around the regions of Aso and Takamori and South Aso-mura.
After a winding, nauseating yet breathtaking bus ride to Aso from Beppu (took about 4 hours), I finally arrived at the Aso station at around 11am. There are two busses departing from the Aso station headed for the bus stop closest to the caldera every day, three busses per day during peak seasons (~9.30am, 12.20pm and 1.20pm may vary according to season).
Most people opt to get off at Kusasenri which is the spot where you get to do horse riding and see Mt. Aso from afar due to the recent earthquake in Kumamoto last year, the cable car going up to the summit of the caldera has been suspended up till now. But fret not, there is another way to catch a glimpse of the caldera if you have some cash to spare, you could take a helicopter ride.
I previously read somewhere on Tripadvisor that you need a minimum of 2 persons to get on the helicopter. As I was travelling by myself, I was pretty worried that they wouldn’t let me in. Thankfully, there were other families and solo travellers who were as eager as I am to take the helicopter ride. It costs 5000yen for about 5 minutes for a helicopter ride of a lifetime which takes you to the caldera as close as possible. To get to the helipad, just get off at the bus stop right before the terminus (the old cable car station), there will be a minivan where the staff is stationed. The staff would note down your personal details and handle payment before you wait for your turn.
Just so you know, there are no busses going from one point to another after 1pm or so, and the next bus going back to the Aso station would only come at 3pm. So since I had a lot of time to spare, I decided to walk to the next stop – Kusasenri (which I’ve mentioned above), which only took me about half an hour. Kusasenri is the most touristy place in Aso, housing restaurants, cafes, souvenir shops, a mini horse ranch (see picture below), picnic spots, so on and so forth. You could also hike up a tiny steep hill to catch a glimpse of the iconic Mt. Aso and the smoke which rises steadily from the caldera.
To sum it up, it was a great and unforgettable experience for me in Aso. Although short, I think it was quite an affordable helicopter ride as the views of the caldera were just priceless. Taking a helicopter ride in some other countries would have costed more I think.
What I learned is that the forces of the Mother Nature, natural disasters in general, are often ruthless in the sense that they destroy homes, livelihood and even killing many innocent people. But over the course of time, landscapes were drastically and permanently changed, soils became more fertile and rich in nutrients, giving hope and new lives to the land that has been reborn after the aftermath of the disaster. So is the cycle of Nature. 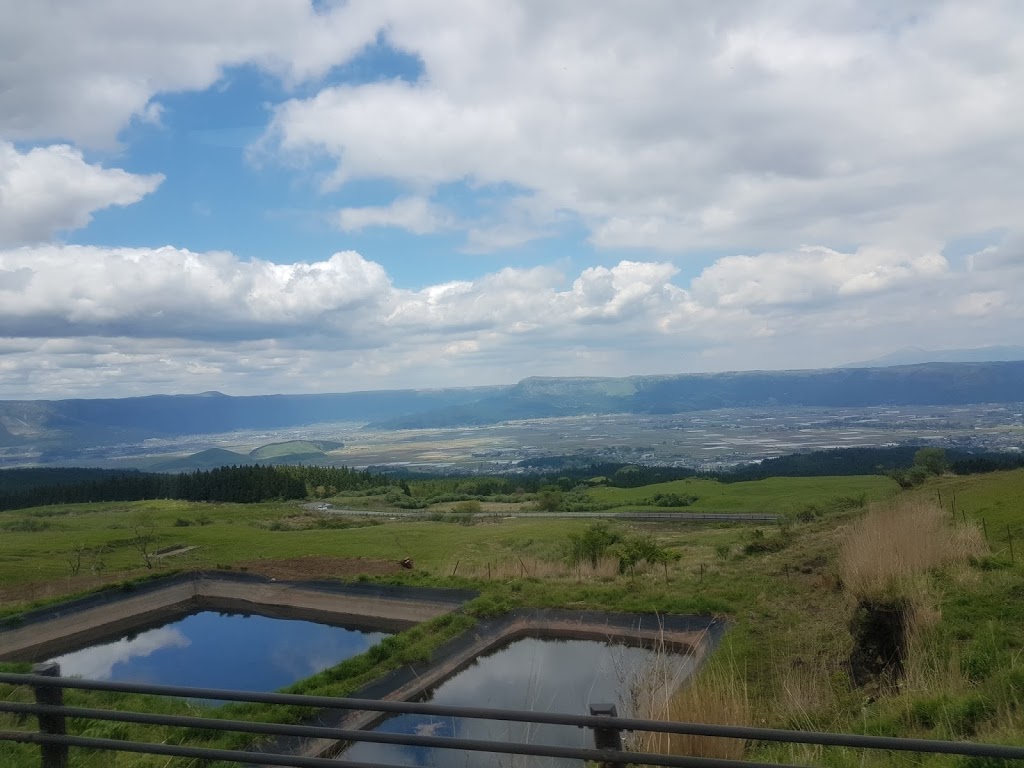 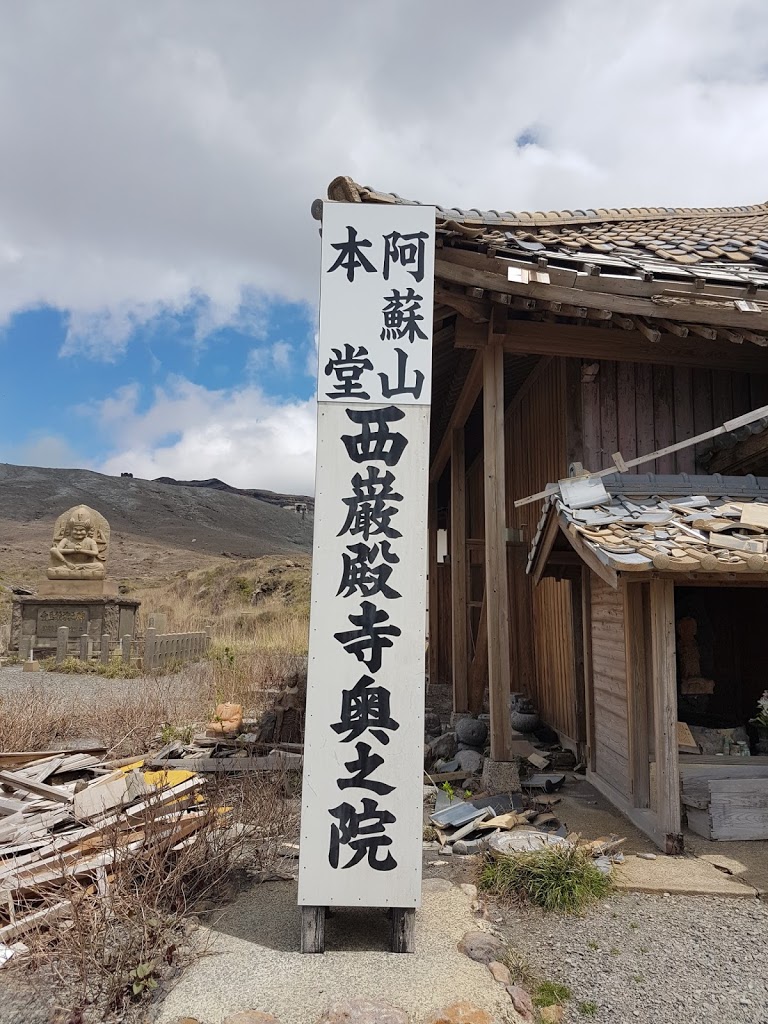 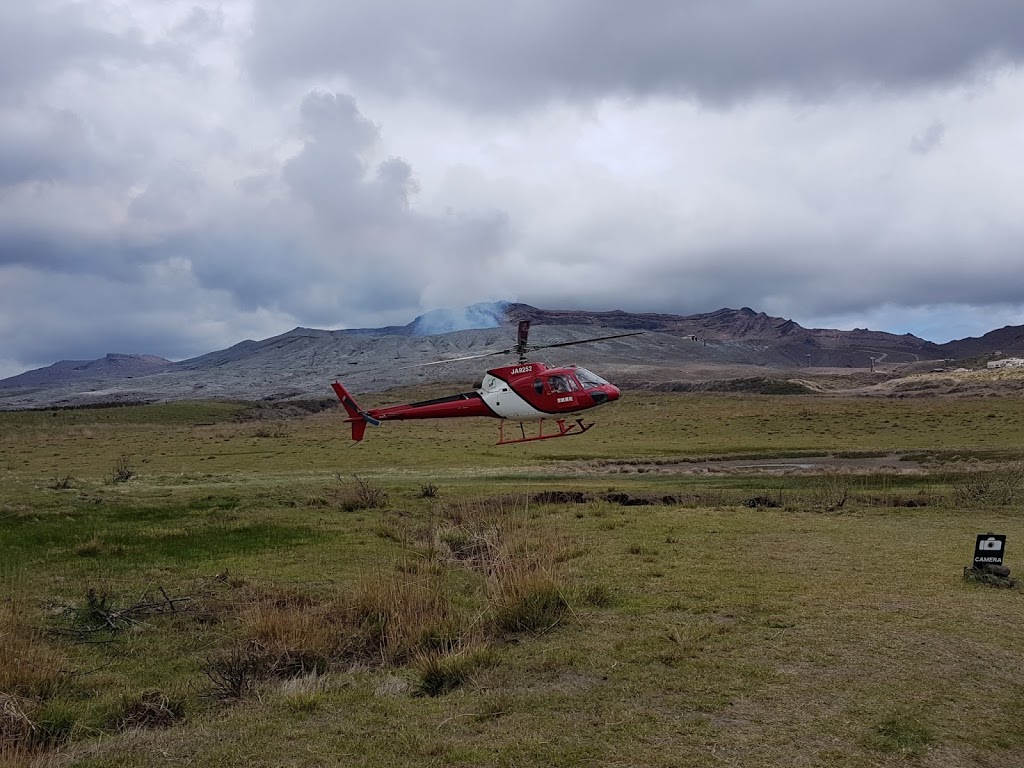 Known as the Land of Gods, steeped in Shinto legends, this place is indeed a gift from the forces of Mother Nature. Carved out of Mt. Aso’s lava and further eroded by the River Gokase, the cliffs and ravines are incredibly flat and symmetrically columnar. The creases and folds even resemble that of the bark of an old tree. The teal-coloured water forms a contrasting juxtaposition against the sheer grey cliff walls, brought alive by the surrounding dense green foliage. The waterfalls cascade against the backdrop of the cliffs is known as Minainotaki and is one of the top 100 waterfalls in Japan.

To be honest, Takachiho Gorge somewhat fell short of my expectation, perhaps I was fooled by the pictures on the Internet, but I still found myself admiring the intricate and unique patterns on the cliff walls which were so symmetrical that one would have thought they are man-made.

After a short stroll around the Gorge and a steep hike on a trail of endless stairs that brought me to the Takachiho Shrine, I found myself randomly wandering around a quiet local neighbourhood where there were no tourists to be found. My main goal was to see the Gorge but I wasn’t prepared to be taken away by the gorgeous views of the mountains surrounding the deep ravine of Takachiho. I somehow found a small open space in a private parking lot where I had the entire panorama of the mountains and lush greenery all to myself. I was so excited that I took countless selfies and even sang at the top of my lungs!

I now truly understand the feeling of finding happiness, peace and calm in the presence of nature. I am constantly awe-struck and revered by the grandeur and sheer beauty of Mother Nature.

So a piece of advice from me, whenever you feel sad or down or stressed from study or work, go out there, soak in the sun, take a stroll in the park, enjoy the soft breeze on your face, I guarantee you will feel so much better. 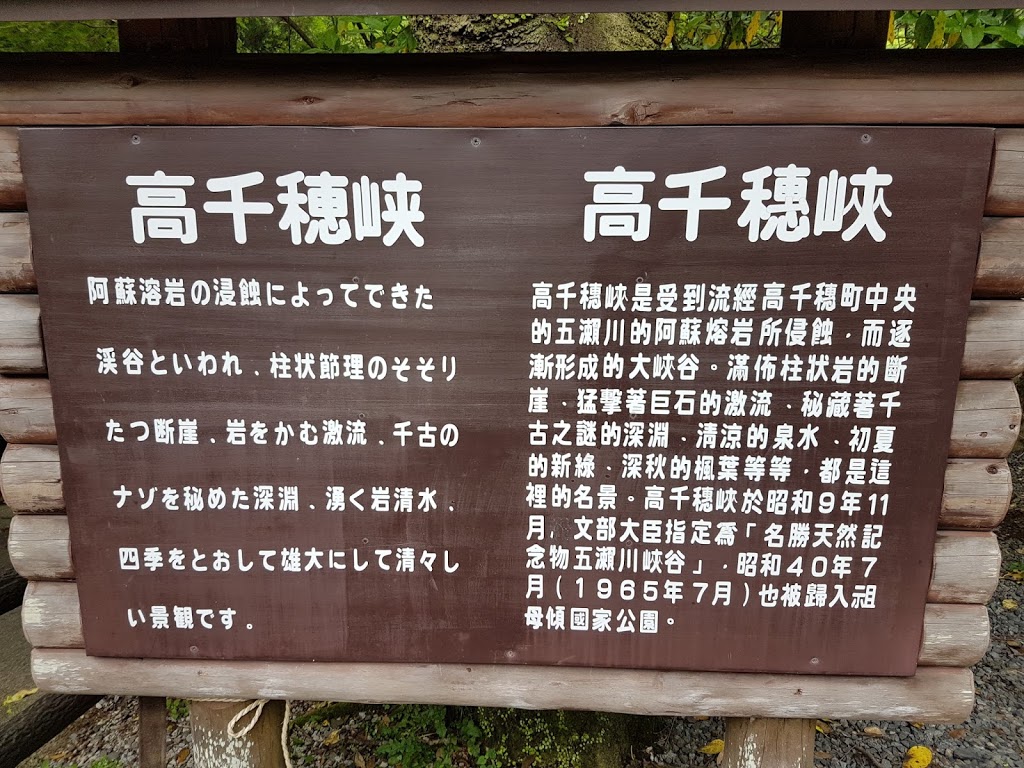