Those of you who are close to me may have already known that I undertook a laparoscopy surgery last week to remove ovarian cysts and some adhesions due to endometriosis.

For those who don’t know what endometriosis is, is a chronic and debilitating condition where the endometrium tissue or implant grows outside of the uterus instead of inside the uterus. These endometrium implants can grow anywhere outside the uterus, most commonly found in ovaries and even the organs surrounding the reproductive organs. During the time of the month, these endometrium implants would bleed as they would inside the uterus, except now they are bleeding and shedding outside of the uterus and causing all sorts of inflammation and pain!
Anyway, due to the severity of my condition, doctor found adhesions formed between my ovaries as well as the bowel, there were also cysts in my ovaries. According to the surgery plan, doctor is going to make three small incisions on my abdomen about 5cm each, and an incision in my belly button for the camera to be inserted in the abdominal cavity. This form of surgery is less invasive than the traditional open surgery, but it’s still considered a major surgery nonetheless with a certain extent of risks involved.
Thanks to the National Health Insurance program in Japan, medical fees were significantly reduced and it had really helped a lot with my finances! Every resident who is working or living in Japan will get a 70% discount on medical services, treatments and medicines. And I was utterly surprised to see my medical bills (inclusive of 1 week of hospital stay, nurse care, meals, medication, surgery, etc) to come slightly under 100,000 yen (about RM 3500 or USD 1,000). It would have cost way more than that amount of money if I’d done it in my home country or anywhere else given the excellent customer service I’d received throughout my stay.
Nurse care was excellent despite the language barrier, they were really patient in trying to communicate with me! From drawing figures to using an electronic dictionary, I felt taken care of and being attended to. It was never frustrating or annoying because of their patience and dedication. Before the surgery in the operation theatre, the nurses tried to calm me down and they even put some lavender essential oils in my oxygen mask to calm my nerves down! Slowly I drifted into deep unconsciousness. Soon after the surgery is over, they gently woke me up, and the next thing I know I was back in my hospital room.
Post-operative care was pretty impressive too, with nurses coming to check on me every other hour throughout the night, taking my body temperature and blood pressure.
Due to hospital regulations, every patient has to be hospitalised for a week. That’s very different from other countries I know where patients are often discharged 2 to 3 days after the surgery. But here in this hospital (I dunno about other hospitals in Japan so I can’t generalise), they really make sure you are well and are fully recovered before you head home. Contrary to what most people would think, hospital meals here are surprisingly not bad. There would be 3 dishes: 1 main (usually meat, fish or tofu) and 2 sides (veges, salad, etc), and they put in a lot of thought and attention to the balance in nutrition, calorie intake and taste of the food. So overall I would give it a 3 out of 5 for the quality of food you get from a 360 yen-meal!
I am now discharged from the hospital and on my way to recovery. I only felt some discomforts and pain on the first day after surgery but afterwards, as I gained consciousness I felt pretty good after a couple of days. So I must say the doctor did a darned good job at the surgery and the nurses too for nursing me to health, and not to mention my dear mom who flew all the way just to be with me (tears of joy)!
Thank you to those who have supported me and cheered me on! :’) 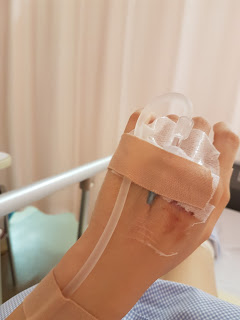